Do you remember what you were doing when you were in fifth grade? You must be playing and chilling with your friends while, Tyler Gordon from San Jose, California, is a self-taught painter who discovered his incredible talent for painting when he was just 10. He has already painted the portrait of more than 60 celebrities which includes Barack Obama, Jay-Z, Beyonce, the Beatles, Jennifer Lopez, Alex Rodriguez, and many more. 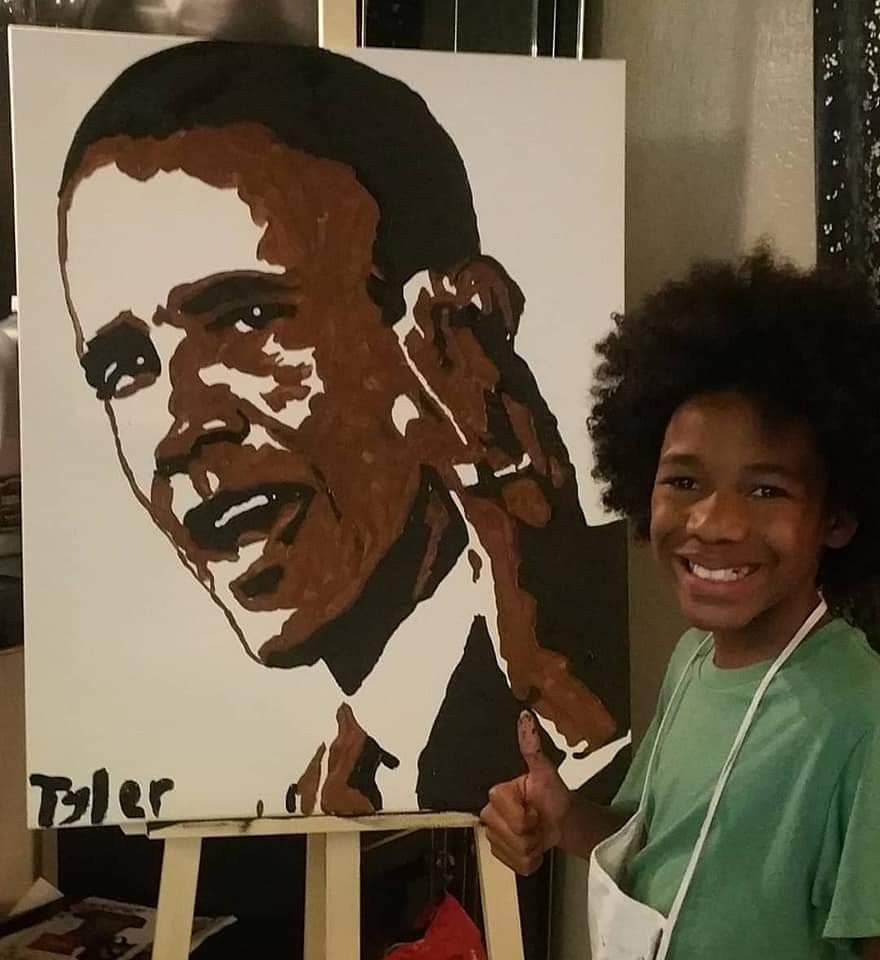 Tyler began to finance his painting by started selling it. Early in his career, he used to sell his paintings for not more than $10. He began to promote his artworks on other social media platforms, like Facebook, Twitter, and YouTube. His works started getting recognized by others resulting in selling dozens of his work online. In July 2018, Tyler appeared on Steve Harvey’s show, “Little Big Shots,” and at San Jose’s Juneteenth celebration at Plaza de Cesar Chavez. There he live-painted for several hours, fueled only by a baloney sandwich where Tyler sold more than 40 paintings that day.

Life Is Not a Bed of Roses:

Being only 13-years-old, Tyler Gordon has fought numerous wars in his life. Tyler and his twin brother were born prematurely at seven months, according to his mother, Nicole Kindle.

She said,” I was told by the doctors that my twins aren’t going to make it”.

Gordon was born deaf until the age of 5. When he had surgery, he was able to hear but only through one ear. Also, after the operation, he began to stammer because of it. Because of this, he even got bullied in school a lot. He was also diagnosed with Vitamin D deficiency resulting in emergency surgery on his hips. He spent a month in a wheelchair, but he still painted.

Like any other young kid, Tyler wanted to play outside with his twin brother and his friends.

“I was crying,” Tyler says when the doctors told him he couldn’t play basketball or football anymore.

Tylers has a deep love for basketball. Kevin Durant (All-Star basketball player) is one of his favorite players. One day, Durant’s mother contacted him about a painting of Durant he had posted on Facebook and offered to buy it for $100.

It was the life-changing moment for Tyler and it was beginning for him in making others happy with his talent.

Durant’s mother still keeps in contact with Tyler, according to Mrs. Nicole. The calls kept coming in.

His mission is to help kids get over the bullying and to help them find their voice. He supports the task with his foundation ‘Tongue Tied,’ which allows other kids to stand tall against bullying. He is truly an inspiration for others.

You may like this: Youngest Artist Of the World!

“Writing is much of a routine for me as is brushing one’s teeth. I don’t look at it as a separate entity to incorporate...